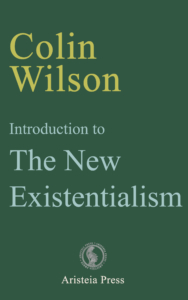 MY OWN APPROACH TO THE PROBLEM

It is necessary to begin with a definition of existentialism. It is, then, a philosophy that asks the kind of questions that were once regarded as ‘religious’: questions about the meaning of human existence, freedom and the existence of God.

Modern philosophy was founded by Descartes, who was a scientist and mathematician. It was he who insisted that philosophy should be no more and no less than a science. But Descartes was also a good Catholic, who had no intention of opposing the Church; he therefore kept his philosophy and his religion in different compartments. He accepted that only the Church can provide the answers to questions about the meaning of human existence and human freedom. This meant that what Descartes called philosophy was a matter of ‘scientific’ questions: What do I mean when I say a statement is ‘true’? What is the relation between the mind and the physical world? What is the relation between consciousness and the senses?

For the next two centuries, the mainstream of philosophy accepted the Cartesian tradition that philosophy and religion should be kept in separate compartments. But since religion, in any case, no longer received universal acceptance, this often meant simply that philosophers regarded religious questions as meaningless. This is the view held today by most philosophers of the school of linguistic analysis – which is at present one of the two most influential philosophical movements in the western world. The other is existentialism.

Existentialists do not accept the view that philosophy has no right to ask ‘religious’ questions. This is not to say that they reject Descartes’ idea that philosophy should be a science. But they cannot agree that questions about the ‘nature and destiny of man’ are meaningless to a scientist, and that therefore it is a waste of time to ask them.

But the question with which I, as an existentialist, have been concerned, is not whether philosophy has a right to ask questions about the meaning of human existence: this I take for granted. There are other assumptions that seem to be made in every book on existentialism with which I cannot agree. It seems to be generally accepted that existentialism is necessarily a philosophy of pessimism – or at least, of a very limited, stoical kind of optimism. Anyone who opens any one of the many books on the subject becomes immediately aware of a certain atmosphere of gloom. In Helmut Kuhn’s Encounter with Nothingness, for example, the chapter headings give us an immediate sense of this negative content: ‘Nothingness Astir,’ ‘Estrangement,’ ‘Condemned to be Free,’ ‘Illumination through Anguish.’ One comes to accept sentences like this: ‘The struggle through the slough of despondency is conceived as the first phase of a dialectical movement.’

All the existentialist texts that I know- whether by Sartre or Marcel, Jaspers or Camus – seem to share this atmosphere. It is an atmosphere we encounter a great deal in modern literature, even in writers who could not be described as existentialists – Aldous Huxley and Graham Greene, Samuel Beckett and Eugene Ionesco, Ernest Hemingway and T. S. Eliot. It is completely unlike the atmosphere we encounter in Wells or Shaw or Chesterton, whose presuppositions are optimistic.

But then, the presuppositions of a poet or novelist are personal and emotional; they may be due to his upbringing, or even to his glands. What business have such presuppositions in philosophy?

Let me expand this. Some years ago, an American psychologist, Abraham Maslow, felt the same kind of instinctive revolt against the ‘atmosphere’ of Freudian psychology, with its emphasis on sickness and neurosis, and decided that he might obtain some equally interesting results if he studied extremely healthy people. He therefore looked around for the most cheerful and well-adjusted people he could find, and asked for their co-operation in his studies. He soon discovered an interesting fact: that most extremely healthy people frequently experience moods of intense affirmation and certainty; Maslow called these ‘peak experiences.’ No one had made this discovery before because it had never struck anyone that a science calling itself ‘psychology,’ and professing to be a science of the human mind (not merely the sick mind), ought to form its estimate of human beings by taking into account healthy minds as well as sick ones. A sick man talks obsessively about his illness; a healthy man never talks about his health; for, as Pirandello points out, we take happiness for granted, and only begin to question life when we are unhappy. Hence no psychologist had ever made this simple and obvious discovery about peak experiences.

The interesting word here is ‘accidental.’ For Sartre, the most basic characteristic of the human situation is what he calls ‘contingency,’ man’s sense that he is somehow not ‘necessary,’ that he is an accident. The suicide is, in fact, making a practical affirmation of this notion. Sartre, Camus and Heidegger take man’s ‘contingency’ to be a basic fact of human existence; man must recognise that he is not the object of a constant loving attention of God or Providence; in the universal sense, he is insignificant. If we look through photographs of suicides in a volume on forensic medicine, this sense of man’s contingency strikes us like a blow; the disfigured corpse seems to negate every human aspiration, and we are aware that the act of suicide sprang from a sense of the meaninglessness of life, or its pointless horror and cruelty. Heidegger or Sartre, examining such a photograph, would say sadly: ‘It is horrible, but it is true; we must face it.’

The peak experience seems to be a denial of man’s contingency, a sudden insight into meaning, when the suicide’s negation is seen to be an unfortunate mistake, like a bankrupt who commits suicide a minute before the arrival of a telegram announcing that he has been left a million pounds.

Now the peak experiences described by certain mystics – Pascal, for example – or conveyed on canvas by Van Gogh in his painting of the Starry Night, may be regarded as dubious testimony; a psychologist would point out that both Van Gogh and Pascal were sick. Science makes allowance for the exceptions, but it builds its edifice upon the rules. But if Maslow is right, peak experiences – that deny that life is accidental and meaningless – may no longer be regarded as the exception; we can no longer dismiss them by referring to them as ‘abnormal.’ Modern literature and psychology play a considerable part in forming the picture that we have of ourselves; but according to Maslow they have been guilty of an underestimation of man’s character and potentialities.

In the present volume, I am concerned to show how the existentialist picture of man – as presented by Sartre or Heidegger or Camus- errs greatly on the side of pessimism, and to show how this error has arisen. What is usually meant by existentialism – the philosophy that began with Kierkegaard and is today represented by Sartre, Marcel and the rest – is consequently no longer a ‘living philosophy’; it is as dead as the phlogiston theory of combustion or Hamilton’s quaternions. It has run itself into a cul de sac, and there is no chance of further development. It was obvious that Camus had reached an impasse some years before his death. Heidegger’s thought has been static for at least thirty-five years. Sartre’s attempt to wriggle his neck out of the noose of his own pessimism, in the Critique of Dialectical Reason, is a failure; he remains awkwardly suspended between philosophical nihilism and Marxian optimism.

But this is not to say that existentialism is dead: only that in its Kierkegaard-Sartre form it has reached a point from which it can neither advance nor retreat. I shall refer to this Kierkegaard-Sartre form as the ‘old existentialism’ or simply as existentialism. My purpose is to outline a new form of existentialism that avoids this cul de sac, and that can continue to develop. It rejects Sartre’s notion of man’s contingency – for reasons which I shall discuss in detail. Its bias is therefore distinctly optimistic, and its atmosphere is as different from that of the ‘old existentialism’ as the atmosphere of G. K. Chesterton’s novels differ from Waiting for Godot. Its methods might be described as Anglo-Saxon and empirical rather than as ‘continental’ and metaphysical. This might seem to be a betrayal of the whole existentialist outlook; but it should be remembered that Edmund Husserl – in some ways the father-figure of modern existentialism – used to tell his students that they could learn more from David Hume than from any other philosopher.

We may request cookies to be set on your device. We use cookies to let us know when you visit our websites, how you interact with us, to enrich your user experience, and to customize your relationship with our website.

Click on the different category headings to find out more. You can also change some of your preferences. Note that blocking some types of cookies may impact your experience on our websites and the services we are able to offer.

These cookies are strictly necessary to provide you with services available through our website and to use some of its features.

Because these cookies are strictly necessary to deliver the website, refusing them will have impact how our site functions. You always can block or delete cookies by changing your browser settings and force blocking all cookies on this website. But this will always prompt you to accept/refuse cookies when revisiting our site.

We fully respect if you want to refuse cookies but to avoid asking you again and again kindly allow us to store a cookie for that. You are free to opt out any time or opt in for other cookies to get a better experience. If you refuse cookies we will remove all set cookies in our domain.

We provide you with a list of stored cookies on your computer in our domain so you can check what we stored. Due to security reasons we are not able to show or modify cookies from other domains. You can check these in your browser security settings.

These cookies collect information that is used either in aggregate form to help us understand how our website is being used or how effective our marketing campaigns are, or to help us customize our website and application for you in order to enhance your experience.

If you do not want that we track your visit to our site you can disable tracking in your browser here:

We also use different external services like Google Webfonts, Google Maps, and external Video providers. Since these providers may collect personal data like your IP address we allow you to block them here. Please be aware that this might heavily reduce the functionality and appearance of our site. Changes will take effect once you reload the page.

The following cookies are also needed - You can choose if you want to allow them: